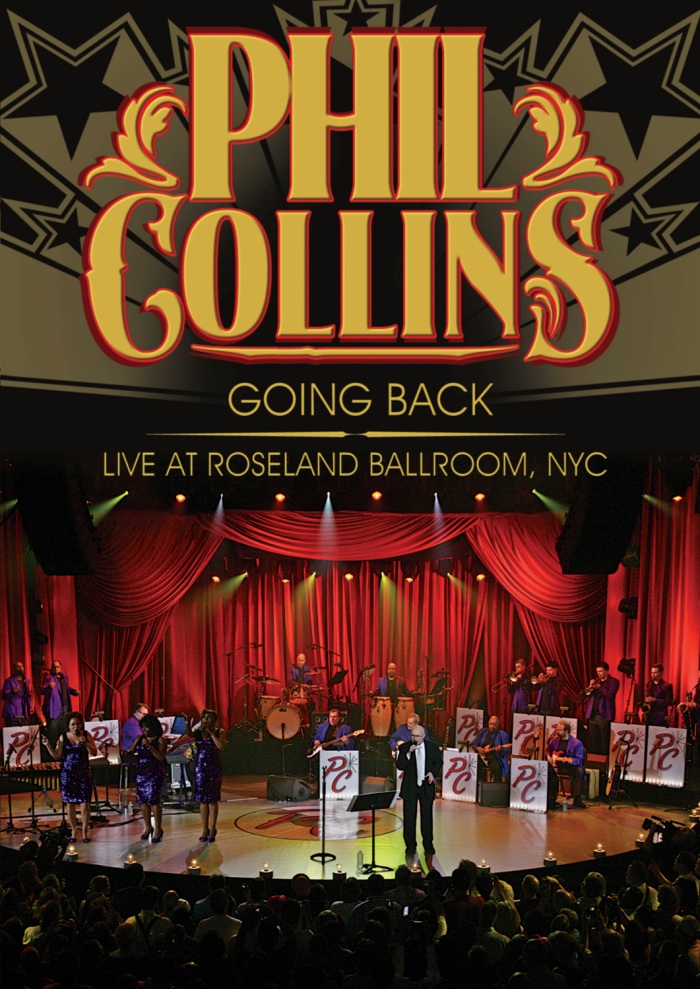 It’s hard to actually make a mark in the music industry. So many talented people try their hand at success, and the playing field, in terms of competition as a musician, is immense. To be able to parlay success, however, in multiple formats and musical arenas, while facing such odds, bears a certain demonstration of both perseverance, and passion.

Phil Collins has always been, to me, one of the most under-appreciated artists for his pure musicianship. This man transcended prog-rock pioneer to power pop mastery, all in the same band; took his solo career to varied radio formats, videos, collaborations, and onto theater stages via musicals; used his unsung drumming talents to propel complex Genesis arrangements to the first-ever Led Zeppelin reunion; and in this latest stage of his career, pursued reliving and celebrating perhaps the favored era of his, which is none of the above: his youth, and childhood.

Beginning in the studio end of this current cycle of projects, Going Back truly is that for Phil. Any fan of his, who’s put time into absorbing his work, knows deep in his soul, is Motown. This album and live representation are literally extensions of what he’s offered live for decades. It was my great fortune many years ago to see Phil with Genesis at a massive Veterans Stadium three-night run in Philadelphia. This 1987 concert came to a conclusion with an emotion medley many, many fans have bore witness to over the years. Phil’s inclusion of these songs was a glimpse at what was to come all these years later.

Roseland, a celebrated live music venue in New York, was home to three nights of performances by Phil and his outrageous band, culled into this one live release. The gorgeous classic interiors of the ballroom are rarely featured throughout the shoot, and it’s a shame, as the room is rich with charm and evokes another age, much like the music Phil ably presents. Much more of a shame is this savage monster of a drummer never once leans into a kit to show off his precision prowess and restrained assault. He’s had a harder time over-coming issues that prevent him from playing full shows, and has stated that last go around with Genesis was likely the finale to such affairs, but to this longtime fan, knowing how much he loved this music, it was tough to never once see him behind a kit. Sure, longtime drummer for Phil and Genesis Chester Thompson is there, and doing just fine. But he was there as Phil played alongside him, too, for the last several decade’s worth of live performances, and that double-drummer aspect was also a side of Phil. He was willing to share the spotlight, and allow other talent to make the whole show bigger, better. The shots of the historic theater interior, and Phil demonstrating his mastery on drums, are the only things missing on an otherwise magical walk down memory lane.

Phil is presented as the Motown hero; it is Phil who’s initials are in place of the legends he grew up listening to, and Phil now introduced and brought to center stage after the gargantuan band warms the crowd up. Dressed impeccably and offered as the consummate crooner as opposed to iconic multi-instrumentalist. That versatility is put aside for a night that, as Phil himself says a couple of times, these are all the songs that meant so much to him (growing up). Signed, Sealed, Delivered is dropped like a thermobaric bomb, in no small part due to the musical elements from the original era he is so infatuated with now integrated into his own homage. The Funk Brothers, legendary musicians Bob Babbitt, Ray Monette and Eddie Willis are proudly displayed, and anchor the evening. After all, Phil may love these tunes, but so do a lot of other folks, and their own memories and nostalgic attachments to these epic pieces of music get equally revved up.

Ain’t Too Proud To Beg slides like The Temps might have grooved it, and the huge 18-piece band lays down a thick, sound, with a fat bottom and super-sized six-part vocals roaring behind. The mix is exceptional, and the clarity of each instrument not lost, as is sometimes the case with such a big production. Dancing In The Streets brought the back-up singers up front for the first of many visits. Brad Cole owned the keys solo and led the groove. Throughout the night he would shine. The baritone sax presence was rich on songs like Heat Wave, with the vocalists still stage-front with Phil and a five part horn section showing why those extra two horns really do matter. Papa Was A Rollin’ Stone is one of the show-stoppers, with a long build up, and after having just seen The Temptations a few months ago in Honolulu, I can honestly say Phil delivers it truer to it’s lengthy epic form. Nice touches like the double flutes during Never Dreamed You’d Leave In Summer lend a lot of studio-like textures to the show, so songs are not delivered in a rushed, stripped down way. It’s like he’s poured over the originals, made sure each crucial element or arrangement would be represented in his versions. That attention to detail is one way the songs have the air of a real tribute.

As the night progresses, the backing vocals on You’ve Been Cheatin’ make the song, and here, some of the signature solo Phil arrangements and stylistic traits are evident. It’s one of a few spots in the show where I saw a direct connection between songs he grew up listening to, and his own solo pop offerings. Loving You Is Sweeter Than Ever brought the singer back to the front, and rocking, though the Going To A Go Go also featuring the vocalists at stage-front somehow came off as more schlock and schmaltz than anything else. More of the ballad side of Phil comes with Blame It On The Sun, and another veer toward sounding almost like a Vegas cover band occurs with Tears Of A Clown. These couple of moments are the only times the evening comes close to ‘cover band cheese’ as is dangerously possible when tackling an evening of covers. Phil only hints at this, and for the most part retains the mystique of ‘Phil Collins as Motown star’ with no other real cracks in the armor.

Nowhere To Run is hard to hear without seeing dancing lobsters for me; blame it on Red Lobster. Still, the band smoke it and continue to burn as they pump out more horn flavor with In My Lonely Room and a tasty horn break mid-tune. The chugging horns are so in the pocket, the groove is a thumping, almost independent organism. I will guess even James Brown would give Phil a high-five for the tightness of this band.

The Take Me In Your Arms (Rock Me A Little While) is one of many high points, the female background singers adding so much, and a moment where the energy mustered is palpable. Again, I wish Phil was on the kit beside Chester on this one, as he almost looked like he needed more to do during this one, and even a few other times over the night. All the singers get into an emotional push for Uptight (Everthing’s Alright) and Phil brings it down, thanking the band, and leaving them to vamp, true Motown-star-style. Going Back had the Phil solo sound richly reminding everyone present the varied, widely diverse catalog this guy has created, while You Can’t Hurry Love reminisced that Phil had been here before himself, just maybe never this far into it. It was a Temptations feeling night as My Girl brought the house down. Your own classic memories, nostalgic images and frames that pop up, are some of the fringe benefits for taking the journey down memory lane with Phil Collins. It’s a nice bonus, from a guy who has given the world a treasure chest of music, and comes full circle like a champ with Going Back.